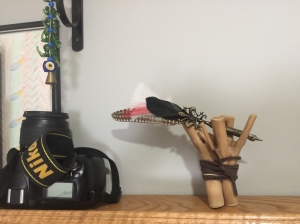 Sometimes you have a longing for pieces that have the lived in weathered look a.k.a vintage I guess !! This particular case is another simple diy I have attempted using drift wood , suede chords , seed beads, shells and vintage coins . It all started with looking for a pen stand for a beautiful calligraphy pen that was gift. I could never put this pen out because any stand I tried hid some part of its beauty I wanted something that will the pen up like your holding it between your index and thumb.

Voila the idea came to use the drift wood I had purchased to make bottle caps for my whiskeybottle art project. The pen stand came together with three pieces of drIft wood , wood glue , suede chords and beads. As it was my first one , the trial attempt to the assembly translated a little differently but incredibly beautiful. Just FYI the trial I did using rubber bands to get the angle I wanted so that I can rest the pen. The reason I’m being defensive 😄 is because in the trial every portion of the pen was visible , but while sticking them a slight angle change resulted in the pen resting position changing..  but hey it stands, it looks gorgeous and the intricate working on the pen is visible.

With one attempt I got carried away and put out a few more for a spot in the house that was begging for some additions☺️ Now you can see the pictures to the get the idea. The entire project at the most would have cost me 25-30$. For one of the pieces I used a skinny scarf I had gotten from charming Charlie , I have a few of these and they are my absolute fav over white shirts. Their simple glass seabead border makes them versatile. So I donated of the scarves for this project 😉 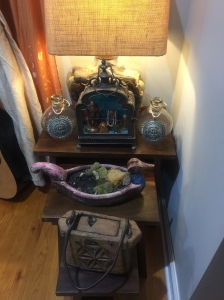 I’m sure I’m not the first one to dress a vase 😄 in fact my first exposure to it was some 9 years ago when I started buying @O-home magazine and nate Berkus book I bought.

Before I jump on to the relevant topic itself I just want to make an observation that diy doesn’t have to be a big do over; many times it’s bringing the small things together that you don’t find help for particularly in a labor expensive country. As I have mentioned before I like to change almost everything after I acquire it; I’m desperate for uniqueness (don’t ask me why 😶).

In this case I saw this vase first and did not buy it. Guess it was lingering in my subconscious mind. But when I came across these pendants the light bulb 💡 happened. From the time I put in its spot I have added few more things to that place 🤓. All it took was three items to make this beautiful set up.

Don’t hesitate when you see a potential after all whats the worse that could happen!! Some of these pendants desperately make me want to go on a curio quest 😌

This is a text widget, which allows you to add text or HTML to your sidebar. You can use them to display text, links, images, HTML, or a combination of these. Edit them in the Widget section of the Customizer.
Loading Comments...